Art as a means of self-expression and therapy is not a new concept. Many famous artists used their art to work through everything from heartbreak and loneliness to joy and rage. Here is a teaser for you!

The concept of art therapy is taking the therapeutic world by storm. But it might be surprising to know that the idea isn’t new. In fact, it is as old as the concept of art. Another thrilling fact is that famous artists whose works have sold for millions of dollars weren’t in their best mental health at the creation of these wonderful pieces but only made them relieve grief, stress, rage, express joy, or other emotional conditions?

In this post, we will list a few of these famous artists who applied art therapy techniques to create some of the most beautiful, expensive, and exciting visual and creative art that graced the earth.

Jean-Michael Basquiat, born 22 December 1960, was an African-American artist whose work became very popular in the 1980s. Basquiat is the most expensive graffiti painter in the history of contemporary arts and responsible for the rise of this art to the New York gallery scene.

In 2016, he set an auction record of $57.3 million at Sotheby’s. However, this record was smashed the following year when the Japanese Billionaire bought Basquiat’s Untitled (1982) for $110 million, setting a new record for the most expensive American artist’s work paid in an auction.

But who would have thought that Basquiat’s expensive pieces of creative art were born out of frustrations and from a chaotic personal life? Being a dropout at tenth grade, an intelligent young Basquiat had a mentally ill mother, and to add more frustrations he became homeless at age 15.

At this time (age 15), graffiti was the only channel for Basquiat to express himself. Still, without any formal artistic training, this young, self-made artist rose to the very pinnacle of graffiti painting using oppression, frustrations, and his numerous conundrum as the drive for his paintbrush.

Edvard Munch, born 12 December 1863, was a Norwegian painter best known for the painting The Scream (1893). Munch is another famous artist known for utilizing art therapy methods. Moreover, his childhood was laden with struggles like illness, depression, and the fear of inheriting the mental condition that ran in his family; so, the right drive for therapeutic art was surplus.

It is said that Munch had no problem expressing his inner turmoil and that his artwork helped him explain life and its meaning to himself.

In the mid-1880s, Munch met the love of his life Milly Thaulow. Although the relationship didn’t last long, most of his paintings were born from the ecstasy, grief, and various emotions during this period. A good example is Self-portrait On The Operating Table (1910), which he made after to depict the moment he shot himself while arguing with Milly.

After his affair collapsed he created Love and Pain (1893–94) featuring a vampiric woman with red hair embracing a man and taking life away from him.  Ashes (1894), depicts a similar theme with a long-haired woman standing confused and a man in misery on the left. All of which, depicted his emotions at the time.

Born 6th July 1907, Frida Kahlo is considered one of the greatest painters in the 2oth century and one of Mexico’s most iconic artists. Like with other famous artists on our list, her life was filled with a few “downs” and these moments were pivotal for art therapy and her artistic legacy.

At 17 years of age, Kahlo was involved in a serious accident, suffering multiple fractures on her pelvis, ribs, spine, elbow, and right leg. And the pain, immobility, and depression that followed could only be expressed by her paintbrush.

Some of her intriguing artwork includes Henry Ford Hospital (1932) showing a naked woman (herself) on a hospital bed with floating pieces like a fetus, pelvis, snail, and flower, among other items, connected to the woman by red, vein-like strings. This work denotes her accident along with her second miscarriage.

Francis Bacon was a famous art therapist and an iconic artist of postwar art. His works depict contorted emotion. “I would love my pictures to look as if a human had passed between them, similar to a snail leaving its trail of the human presence... as a snail leaves its slime,” Francis wrote.

Francis’ Triptych Three Studies of Lucian Freud (1969) was auctioned for $142 million, making it the most expensive artwork sold at auction in 2013. He made this piece to express and relieving his grief from the passing of his lover, George Dyer.

Born 25th December 1911, Josephine was a French-American artist, best known for her sculpture and installation art but this famous art therapist was also a painter and printmaker.

Josephine always agreed that pain, the uncertainty of the future, loss in the presence, and fear of the grip of the past as the concept of her art. In her words “The subject of pain, giving meaning and shape to frustration and suffering is the business I am in.”

Some of her works include Femme Maison (1946-47) meaning “housewife” expresses her female identity and her transition to motherhood.  The Blind Leading the Blind (1947-49)- a wooden sculptural piece featuring pointed wooden planks pointing down from a flat beam representing her mixed feelings of her parent’s and her experience of parenthood. 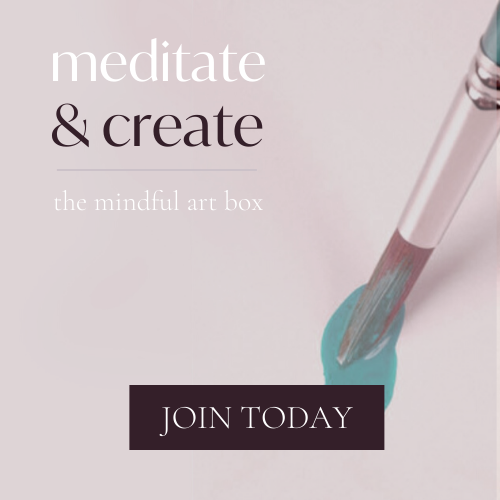 Use Meditation While Painting To Overcome Creative Blocks

How Art Can Make You More Mindful

How Do Art And Meditation Overlap